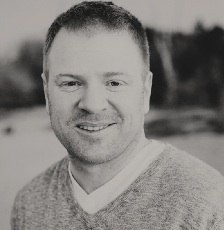 Before I get started on my rant, I want to preface this by saying that mobile marketing, in and of itself, does not annoy me. I truly believe in its power, if it is used properly. What does, however, baffle and irritate me simultaneously is when companies misuse this effective tactic so blatantly. If you are in charge of your company’s mobile strategy (especially if you are B to C) , here are a few things that you should avoid.

There have been several nights over the last few weeks where I’ve been right on the verge of drifting off into dreamland, only to be jolted back into consciousness by the SMS tone on my iPhone. Almost instinctively, I reach over and grab my phone, hoping that it’s not a family member notifying me of an emergency. I mean, what else could possibly be so important to warrant this late night text message, right? 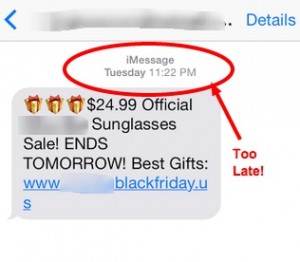 Turns out, a company, which will remain nameless, decided that bedtime was an optimal time to send me a message about their latest deal. Really? Your store isn’t even open, and I’m certainly not going to pop up first thing in the morning and rush in to take advantage of the deal. In fact, due to this company’s thoughtless interruption of my precious sleep, I may never shop there again.

I know, you’re probably thinking, “Why don’t you just turn off the sound?” And you’d have a good point, but I fall into the category of those who don’t own an alarm clock and rely on their trusty smartphone to wake them up on the morning. So, unfortunately, that’s just not an option. And these days, I am probably in the majority, so please, pay attention to when you are sending your SMS marketing messages, because it’s likely you’re doing more damage than good.

Another tactic that irks me is the urgent, last chance deals that I get from certain companies. Again, I won’t mention company names, but you know who you are! This tactic annoys me, because it turns out that the deals that I’m urged to act on immediately or risk losing out, turn out to be the last chance only if I am not patient enough to wait two days for the next deal, which is typically exactly the same as the last deal.

As with the late night specials, this tactic will likely have the opposite effect as well. While companies hope to send shoppers into a frenzy with deals that are about to expire, the realization by those shoppers that these same deals will be back in a couple days if they just wait will cause many of them to become lackadaisical. Why not wait and see what other deals come along? Maybe you’ll even find a better deal at another store. And if not, then the last chance deal will be back again in a couple days anyway, right?

Perhaps the worst offender of all is the company that simply overdoes it on the frequency of messages. I don’t need to hear from you every day. In fact, I’d rather not hear from you every week, especially if you are doing nothing more than bombarding with me sales and promotional messages.

How much is too much? I understand that this is a difficult question to answer, but I would guess that a really large percentage of your targets do not want to be contacted every day with a similar message pushing them to buy your products or services. We aren’t friends. You are a company looking to sell me something, and I am a consumer with limited resources, which I am not willing to give away to the most annoying caller.

So get your team together and figure out an optimal number of messages per a specific time period to send to your subscribers. You may need to conduct surveys or focus groups to figure this out, but you’ll benefit in the end by not upsetting anyone and sending them fleeing into the safety of your less annoying competitor’s arms.

Hopefully this article has made its way to the computer screens of those responsible for these types of obnoxious mobile marketing campaigns. If you are one of the offenders, or you are looking into starting a mobile marketing campaign, please, I beg of you, take the above advice to heart. Don’t annoy your potential customers. If you do, they will become your competitors’ potential customers in a heartbeat.

What other mobile marketing tactics annoy you? I’d love to read your opinions in the comments below.