Automated Responses in Social Media are a Bad Idea

Automated Responses in Social Media are a Bad Idea 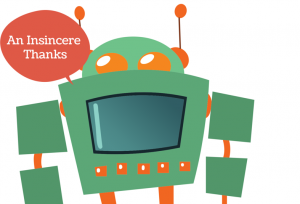 When I follow someone [on Twitter], and receive an automated direct message a few minutes later to thank me, I’m not overly impressed. It’s nice to be thanked, but receiving a thank you by a robot doesn’t have the same effect as an old-fashioned sentiment from a human. Jonathan Crossfield echoes this opinion and he says he immediately unfollows these accounts. Many other content marketers share our opinion. But why are they so offended by what is supposed to be a service of courtesy and convenience in our digital world?

1. It’s not exactly courteous or convenient.

Receiving an automated response simply acknowledges that you know how to schedule posts.

Social media is all about interacting with others and building relationships online. Interacting is the operative word here, and it is impossible to interact without being present. Automated responses actually cancel out the positive effects that social media can have for your business.

3. Some of the best examples of social media occur in response to current events.

Several large companies, such as DiGiorno Pizza, are known for their fantastic social media campaigns. They use their social media to comment on current events, joining the conversation and blending both marketing and humor. Using current events as a way to market makes the company both accessible and increases SEO coverage—their commentary on the event will show up with media coverage.